A continuation of the previous articles.

An explosion has severely damaged the Crimean Bridge that connects the peninsula to the Russian mainland. Portions of the bridge have collapsed into the water.

Ukraine’s intelligence services have taken credit for the bombing of the Crimean Bridge. It remains unclear if it was a suicide attack or a bomb was hidden in a truck. Russia’s Foreign Ministry says the attack shows Ukraine’s government is a terrorist regime. 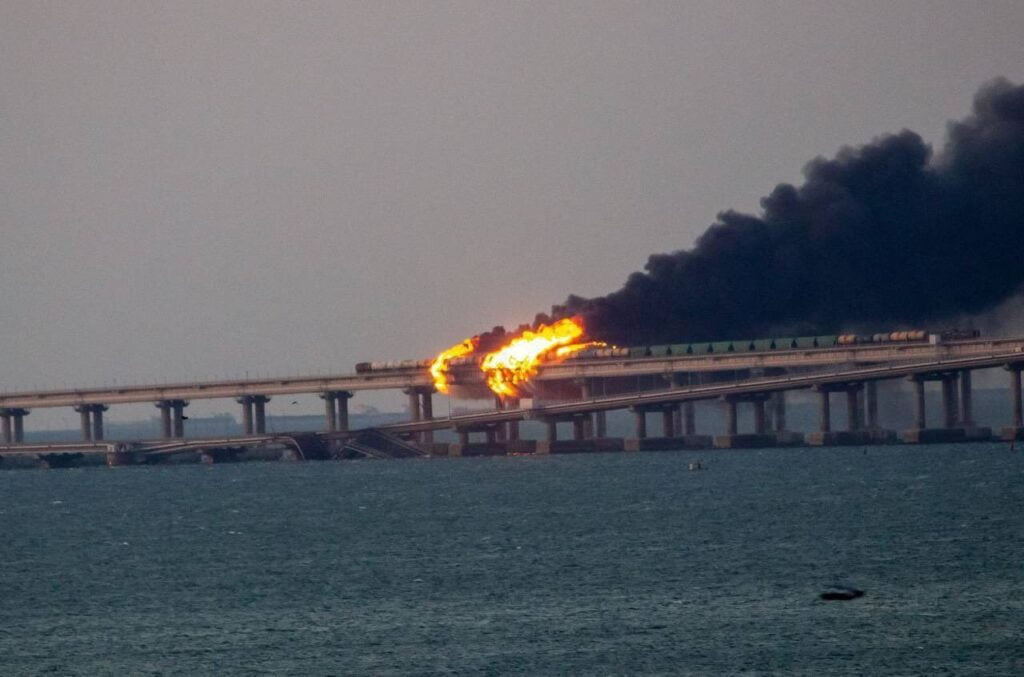 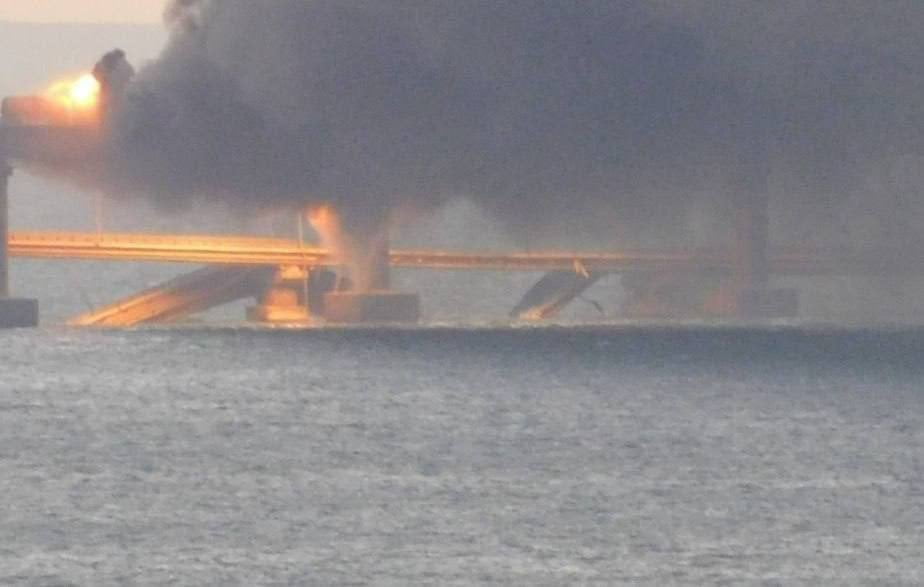 This was apparently filmed by an eye witness. Looks like missiles hit the bridge.

For many years, NATO have wanted this bridge gone. They have always seen it as a tactical advantage for Russia. 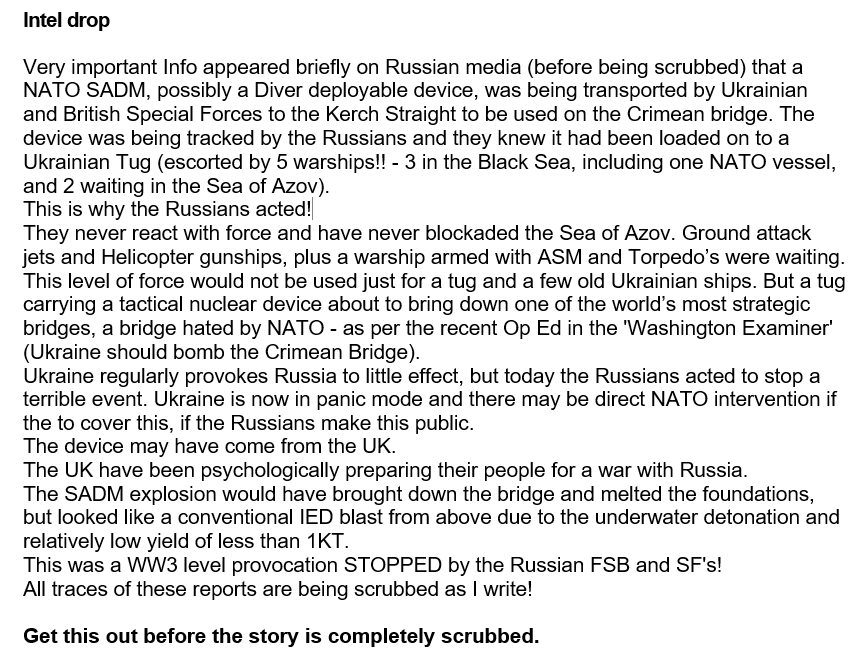 Just in case anyone had forgotten, Zelenskyy uses a green screen.

British ‘journalist’ doing a ‘report’ from Ukraine, in the grass to imply he’s in the thick of it, then a lady casually strolls into frame, with her shopping & her dog. Wake Up! The News is Fake!

Never trust what you see from the media, footage & images are regularly used from 2014-2016. Here is an example:

Oct 21st, 2022 — There were reports on Russia TV that Ukraine has a nuclear bomb primed in Mykolaiv which it will detonate and blame on Russia so that the US is forced to get involved in the war.

Vlada Lugovskaya, a young reporter from “Tavria” TV Channel, was among those on the ferry crossing when the Ukrainian forces targeted civilians with HIMARS using cluster munitions. 4 dead, 13 injured.

This was a civilian column – just people who wanted to leave the city.

Of course… Ukraine denies the allegations.

Leaked documents show that British spies are constructing a secret partisan terror army in Ukraine. The UK is actively involved in terror attacks against Russia, basically amounting to a declaration of war with Russia.

The UK People do not support these actions against Russia, neither do we recognise this Government as of, by and for the People. We are therefore dissolving Parliament. All existing parties are now categorised as terrorist organisations, and all sitting MPs are banned from holding office again. Read about Dissolving parliament Just 2 days prior to this, Maria Zakharova released the following statement:

Millions of pounds for the “development of democracy” from a country that is ineffectively struggling with a political crisis and changing its head of government for the second time in six weeks -not through elections, but by an autocratic decision of the elite.

The Anonymous group has obtained documents containing the UK’s plans for aggressive interference in other states’ internal affairs – nearly endless arrays of information, hundreds and thousands of reports, plans, strategies and projects.

Some of them are drawn up in such a way that makes it clear they were written by professionals and those professionals worked on them for a long time. In the most British manner, they painstakingly researched those who could be approached, on what terms, and what tasks they could perform and of course, what leverage could be used to hold them accountable for the result.

One of these projects was the so-called Theory of Change, a plan for working with “civil society” in Russia. A detailed account of London’s plans to interfere in Russian domestic politics was published recently. If anyone still has any doubts as to whose orders foreign agents are following and whose agenda they are promoting, watching this will certainly remove them.

In short: by promoting the gender agenda, which is everyone’s concern, London actually seeks to promote certain Russian organisations it has on retainer as political centres established to unite representatives of non-partisan opposition and protest voters. This is direct interference in the internal affairs of our country and one of the reasons everyone receiving foreign funding should publicly report it and use the appropriate label.

The same way this is done in the UK. the US and other Western countries.

The country should know its foreign agents who try to pass as heroes.

The mainstream media tells us that Russia frustrates the UN Security Council by abusing the veto power.

However, yesterday, the US, UK and France rejected Russia’s legitimate call for an international investigation into US biolabs in Ukraine.

Tell me, who exactly are the bad guys?

There’s enough evidence on this site alone to warrant an investigation.

What do secret U.S. Bio-laboratories do in Ukraine?

Timeline of US Bio-research in Ukraine

Journalist Alina Lipp, is being punished for showing the world the truth about the proxy war in Ukraine. As the only German journalist in Donetsk, she regularly featured on German TV reporting live from Donbass, until she reported the truth of what she’d witnessed, how the Kyiv regime was shelling & killing thousands of innocent civilians in Donbass, exposing the war crimes Ukraine has been & still is committing against its own people.

The German state has seized funds from Lipp’s bank accounts and is prosecuting her under new speech laws for her reporting of the conflict in Ukraine. She faces up to 3 years in a German jail. As it turns out, the above mentioned FTX cryptocurrency exchange had ties to the Ukrainian government, the World Economic Forum and Joe ‘kid sniffer’ Biden’s top adviser.

Just a reminder, Nazism in Ukraine began with Stepan Bandera, around the mid 1900’s, they were allied with Germany’s Third Reich during World War 2.

Today, their numbers have grown massively and are responsible for the deaths of over 13,000 Russian speaking Ukrainians over the last decade alone.

RE: The 2 Missiles that hit Poland

When the news broke that 2 missiles had hit Poland, the media’s irresponsible reporting, shortly followed by the media lackeys on social media all screaming “Russia did it”, fanning the flames of war, that is what should really concern us.

You should know by now the lengths Ukraine goes to, to create something to blame Russia for.

Ukraine are desperate to get NATO involved, which would likely evolve into a 3rd World War. They keep staging atrocities against their own people, then tells the world it was Russia. They are professional propagandists, never believe anything they say.

Take note of all those quick to blame Russia, even making up stories to make it sound more official, because once the truth comes out, you will know who you can & really shouldn’t trust.

The following day, every tabloid had front pages like this: 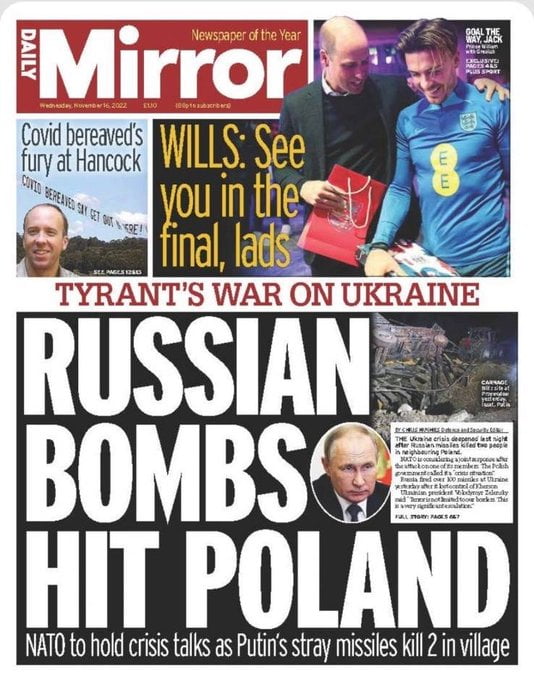 Because of the media’s relentless barrage of blame directed at Russia, social media filled up with posts like these: 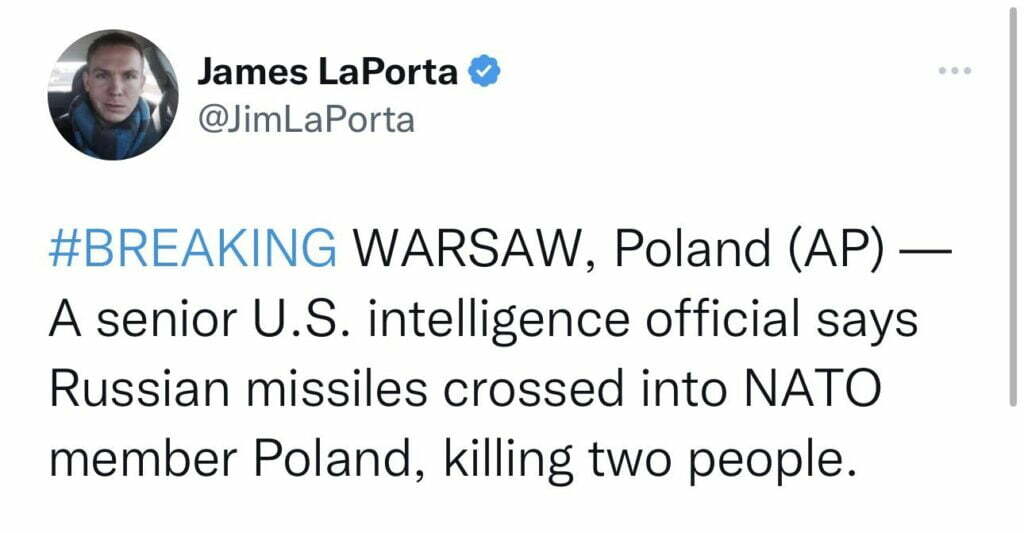 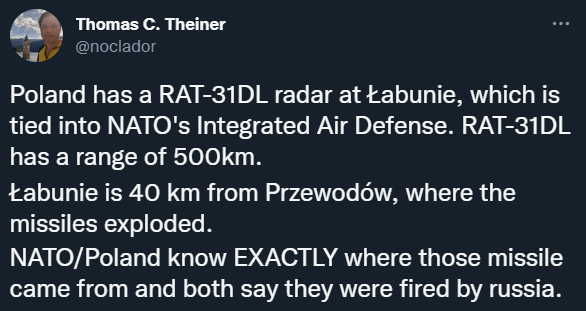 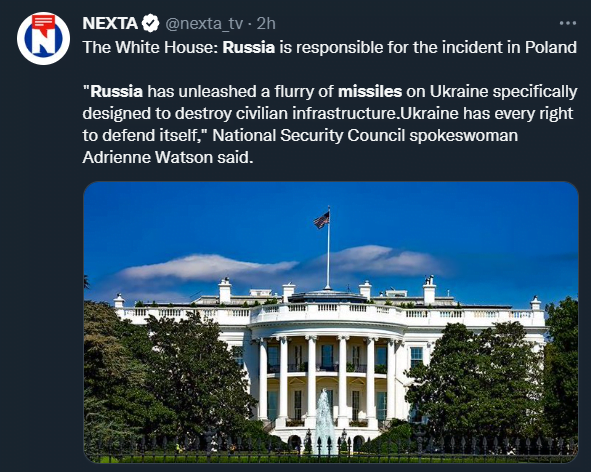 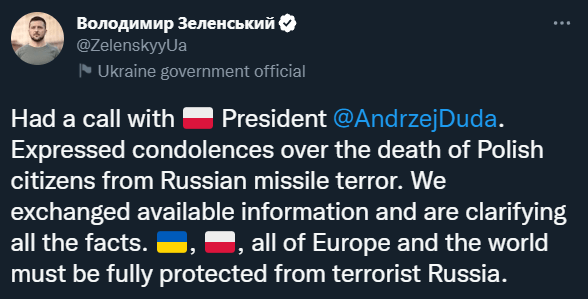 24 hours later, the Truth Trickles out…

First came the independent researchers, with their findings regarding the missiles.

“These are 100% Ukrainian casings of the S300 missiles, with which the Ukrainians tried to knock down the Kalibr missiles. 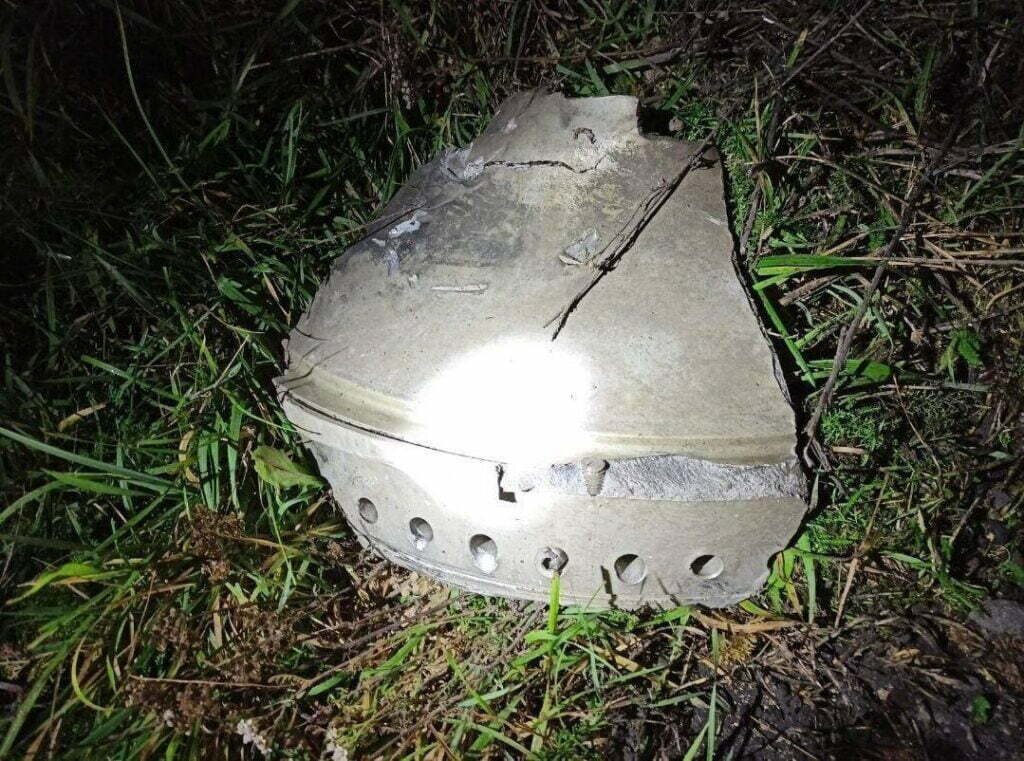 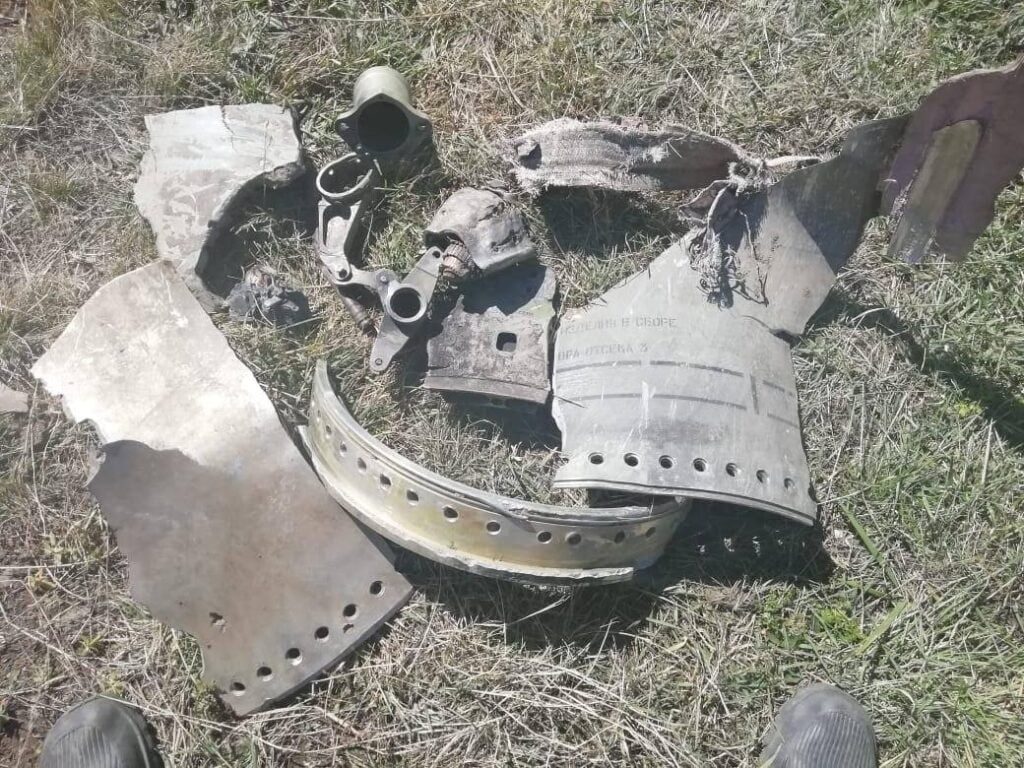 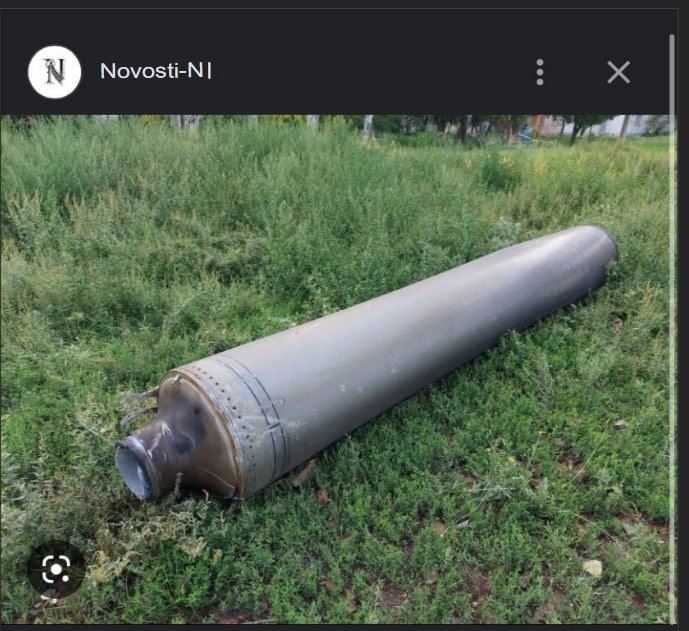 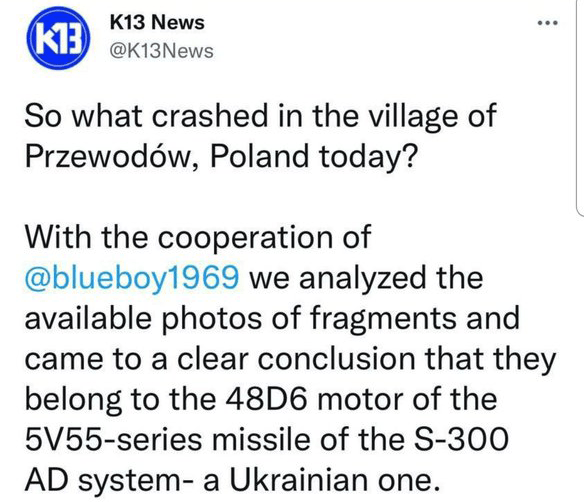 Joe Biden – “It is unlikely that missiles were launched into Poland from Russia”.

The Polish PM said “the missile that struck Poland yesterday was most likely an ‘unfortunate accident’ fired by Ukraine”. 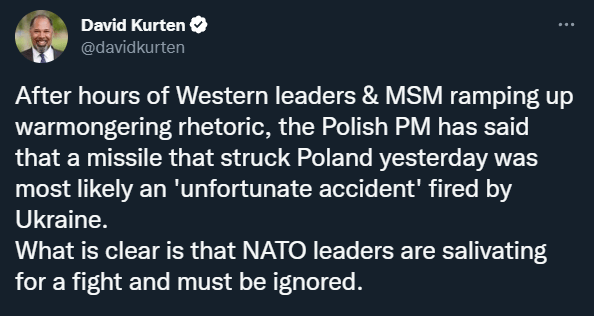 Once the truth comes out, watch how all those that spouted ridicule at Russia go silent, and say nothing negative about Ukraine. Talk about double standards.

Its just as well the Polish PM didn’t jump to the same unfounded conclusions, would have given NATO the excuse they’re looking for, to go to war with Russia. He thinks Ukraine is trying to provoke NATO into the war before the Russian military is reinforced with 200,000 troops next month.

A Russian volunteer reveals that his regiment came across a Ukrainian Satanist ‘children’s organ harvesting network’ in Izyum.

Ukraine for several decades has been a hot zone for human trafficking & organ harvesting, which is big business.

Now you know why western leaders keep throwing money to Ukraine, attempting to keep it all safeguarded & hidden from public knowledge.